Whether or not you’ve gotten used to to connecting with family, friends and colleagues over Zoom and FaceTime—virtual life is becoming a new reality for all of us.

4 Tips for Staying Safe from Covid-19 This Summer

We break down the essential advice you need to know to stay healthy and safe this summer.

Seniors — and their financial and insurance advisors — are searching for innovative ways to use existing assets to help pay for their costs of living in retirement, including their health care cost, in this down economy. The absence of solutions often means that these costs will be borne by taxpayers.

It pays to enroll in Medicare on time if you're no longer covered by a group health plan through a job (either yours or your spouse's), because paying for private insurance out of pocket could be astronomical.

The heart might become enlarged, develop more muscle mass, or pump faster in order to meet the body’s needs, causing you to feel tired, light headed, nauseous, confused, or lack an appetite. The best prevention is to follow a doctor’s recommendations to decrease your risk for coronary heart disease and high blood pressure.

Certain icons have recently been added to the website to inform consumers about abuse at a nursing home. If a nursing home was cited for potential issues regarding abuse, a red icon with a hand is shown next to that nursing home name. A different icon with an exclamation point indicates that a nursing home has a history of poor care and may need increased oversight and enforcement.

Nursing homes in New York cost between $12,000 and $20,000 a month. Very few people can afford the high cost of 24-hour skilled nursing care provided by nursing homes. Although both Medicare and Medicaid may pay for the costs, the two programs differ significantly.

Medicare is a federal health insurance program for people age 65 or older or for younger people with disabilities. Medicare will pay for short-term nursing home stays for rehabilitation purposes to help improve a health condition or maintain a current health condition.

If a patient has a qualifying stay in a hospital for a minimum of three days, Medicare will pay for rehabilitation costs in a skilled nursing facility for up to 100 days. Medicare fully pays for the first 20 days and then partially pays for the next 80 days. The patient has a co-pay for the 80 days paid either from their own funds or possibly through secondary insurance coverage.

It is heartbreaking to move a loved one to a nursing home. In addition to the frustrating rules involved in the government paying for nursing home care, finding an acceptable nursing home is another overwhelming task for the family. The Compare Nursing Home website helps in the search by giving critical information about safety or the lack of it for vulnerable patients in nursing homes.

18% of older adults were treated for CKD or a slow loss in kidney function over time.

27% of older adults were treated for diabetes last year– a disease that occurs when your body is resistant to, or doesn’t produce enough, insulin. Insulin is what your body uses to get energy from food, and distribute it to your cells.

Medicare Costs - The older we get, the more health care we need — and medical care is expensive. Medicare, the government’s health insurance program for seniors, helps with those costs.

47% of older adults are treated for high cholesterol – a condition that occurs when your body has an excess of bad fats (or lipids), resulting in your arteries getting clogged, which can lead to heart disease.

“These benefits are focused on keeping people well and can save the beneficiary and the plan a lot of money in the long run,”

Seniors who took up short bursts of activity, experienced and displayed an improvement up to 30% in memory tasks.

Between Oct. 15 and Dec. 7, Medicare participants can make changes to their plan(s). Here are a few reasons you may want to take advantage of this open enrollment period.

Experts have a message for anyone thinking about relying on basic Medicare with no extra coverage: Don’t do it.

Some Medicare Supplement premiums are going up about 15 percent (check your insurer) beginning Sept. 1.

A new study reveals high use of dietary supplements by Americans 60 and older. In addition to their prescription medications, many older people are taking multiple preparations that have not been approved by the Food and Drug Administration.

The study, published in the October issue of the Journal of Nutrition, is based on data gathered by the government’s National Center for Health Statistics. It found that on a daily basis, 70 percent of older Americans use at least one supplement — preparations that include vitamins, minerals, herbs, amino acids, enzymes and other substances. Twenty-nine percent of older Americans use four or more supplements each day.

The researchers found that supplement use tended to increase with age, and that people who took prescription medications were more likely to use supplements as well. Eight percent of older adults take three medications daily and at least one botanical supplement.

That’s potentially worrisome, because some supplements can alter the effects of medications. For example, use of the herbal supplement ginkgo biloba with blood pressure medications could cause a person’s blood pressure to drop too much, and can raise the risk of bleeding for users of prescription blood thinners such as warfarin, according to the University of Maryland Medical Center.

The researchers wrote that health care professionals need to carefully monitor their patients’ supplement use. In a study published in 2010, only a third of patients said their doctors had asked whether they used supplements.

The study was conducted by researchers from the National Institutes of Health and Tufts and Purdue universities.

Eating well is important at any age-  adequate nutrition is necessary for health, quality of life and vitality. Unfortunately, for a variety of reasons, many seniors are not eating as well as they should, which can lead to poor nutrition or malnutrition, easily being mistaken as a disease or illness.

Our bodies change as we get older, including perceptual, physiological and and general age-related conditions — such as dental or gastrointestinal conditions. These changes all influence the performance of our body as a whole, which in turn, influences our eating, nutritional intake and overall health.

Perceptual changes later in life can also influence our nutrition, such as changes in hearing, smell and taste:

Hearing: Diminished or loss of hearing also affects our nutrition and food experience. The difficulty and frustration from the inability to hold a conversation with our eating partner out at a restaurant or at a social function can limit one’s food experience.

Smell: The loss of smell can also have a huge impact on the types of food one chooses to eat as there is a loss of satisfaction that can lead to poor food choices.

Taste: One of the most common complaints is in regards to the diminished taste in food. As taste buds decrease, so does our taste for salty and sweet — often times making food taste more bitter or sour.

One reason nutritional needs change is due to physiological changes that occur later in life:

Function: Our bodies also begin to experience a decrease in kidney function, redistribution of body composition and changes in our nervous system.

Other changes in body function may impact nutritional intake, such as:

Dentition: The makeup of a set of teeth (including how many, their arrangement and their condition). The loss of teeth and/or ill-fitting dentures can lead to avoidance of hard and sticky foods.

Gastrointestinal Changes: Chronic gastritis, constipation, delayed stomach emptying and gas, may lead to avoiding healthy foods, such a fruits and vegetables — the food categories that should be more emphasized rather than eliminated.

These factors alone may contribute to why 3.7 million seniors are malnourished and shed light on the importance of educating caregivers and aging seniors as to specific dietary need options, as well as, catered senior diets and nutritional needs.

Basically, it's a stronger flu shot.  Four times stronger to be precise.

This flu vaccine could significantly reduce the risk of hospitalization among especially vulnerable seniors, a large, random clinical trial has found.

“…the rate of hospitalization for any reason, respiratory or otherwise, was significantly lower in the high-dose group…”

While a prior study showed that older individuals could respond better to the high-dose vaccine, it focused on relatively healthy older adults, says lead author Stefan Gravenstein, professor at both the Warren Alpert Medical School and the School of Public Health at Brown University. 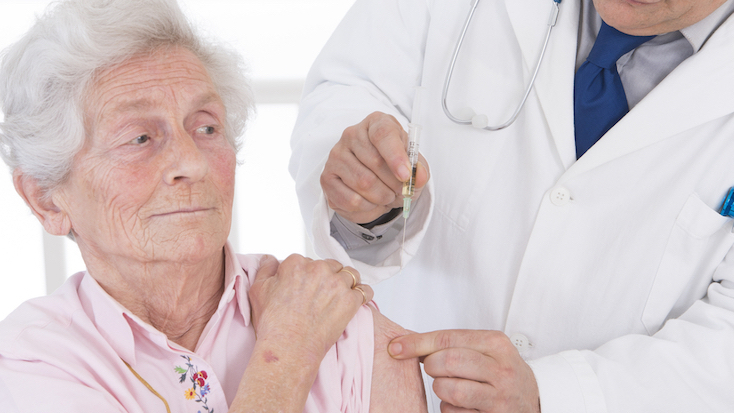 It still needed to be established that it would help even the frailest folks, like those who reside in nursing homes.

In this study, a quarter of the sample was over 90. DId the high-dose vaccine also work better than regular-dose vaccine in the population we consider least able to respond. This paper says yes, it can.

The study compared hospitalization rates among more than 38,000 residents of 823 nursing homes in 38 states during the 2013-14 flu season based on Medicare claims data. Just under half the homes, 409 to be exact, administered the high-dose vaccine while the other 414 provided a standard dose.

Moreover, the rate of hospitalization for any reason, respiratory or otherwise, was significantly lower in the high-dose group as well. For every 69 people given the high-dose vaccine vs. the standard-dose vaccine, one more person stayed out of the hospital during the flu season.

For many patients, the vaccine appeared to help prevent hospitalization for other problems also, including cardiovascular symptoms.

Nope, the flu vaccine won’t give you the flu

Gravenstein says the finding of a significant reduction in hospitalizations was particularly notable because the predominant flu strain during the 2013-14 season, A/H1N1pdm, was believed to be less virulent in older people who had spent a long lifetime building up immunity to similar strains.

“That there was differential protection in this context both underlines the potential importance of even low-virulence or less transmissible strains to older populations and the fact that vaccines may afford relevant effectiveness among frail older persons even when A/H1N1 predominates,” the authors write.

The study did not find a significant difference in the rate of death. Researchers speculate that while the standard-dose vaccine might not have been strong enough to stave off illness entirely, it may still have been sufficient to prevent deaths in combination with hospital care.

But a significant reduction in hospitalizations can still be a benefit, Gravenstein says, even though the high-dose vaccine is more expensive than the standard-dose vaccine. Especially for older, frail patients, reducing otherwise necessary trips to the hospital can maintain a higher quality of life.

Ultimately, Gravenstein says, the study should provide nursing home leadership with useful information to consider as they plan for future flu seasons.

If you are, well, congratulations.  If you are planning on signing up for Medicare, here are the 'basic' basics to know before enrollment begins October 15th.

Also, you should start browsing Medicare.gov

Is Your Doctor Aware of How Expensive are the Drugs He/She Prescribes? September 6, 2017 12:22

FYI...This is NOT medical advice. Talk to your health care provider.

In 2013, pharmacy benefits manager Express Scripts estimated that the United States wasted $418 billion on “bad medication-related decisions”—with $55.8 billion alone on high-priced medications when more affordable drugs could have been used instead.

Expensive is simply not always better.

Here are ten prescriptions that are usually very expensive, even with insurance. All of them have cheaper alternatives that work just as well.

Here are ways to put your priorities at the top of your doctor's agenda..